Bezos and crewmates to Space and back in under 15 mins 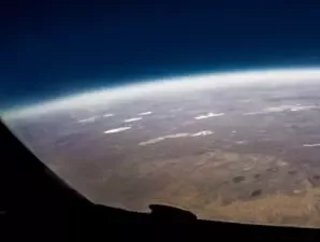 Bezos was accompanied in the capsule made by his company Blue Origin by his brother Mark, female aviation pioneer, Wally Funk and 18-year old Dutchman, Oliver Daemen. Just before 9.15 am US Eastern Time, the four were blasted into space on the first human flight on Blue Origin’s New Shephard launch vehicle.

Bezos is the second billionaire just this month to reach the edge of space: Richard Branson rocketed there last week aboard a vessel made by his company Virgin Galactic.

And the date of the New Shepard's maiden launch is no accident: July 20 was the day in 1969 that Neil Armstrong and Buzz Aldrin landed on the moon.

Up 62 miles above the Earth in minutes

The New Shepard suborbital flight path is designed to go higher than the Kármán Line,  - this  is often considered the boundary of space and is at about 62 miles above the Earth. The line has been a bone of contention in the ‘Space Race’ between Bezos and Branson. This is because Branson’s SpaceShipTwo hit a peak altitude of around 282,000 feet - higher than NASA’s designated Earth-Space boundary of 50 miles, but still short of the Karman Line.

About three minutes into the flight, the booster separated from the crew capsule. Then the New Shepard passed the Kármán Line, with hoots of celebration heard over the in-shuttle audio. A sonic boom was heard as the booster returned to Earth.

The capsule remained in the skies for longer. At about the eight-minute mark of the flight, parachutes deployed from the capsule, to give the crew a gentle touchdown. All together, the mission lasted roughly 11 minutes from takeoff to touchdown. Bezos stepped off the capsule first, followed by Daemen, followed by Funk  and then lastly Mark Bezos.

The start of a space tourism era?

The launch was a big day for Bezos, but it's primarily an advertisement for Blue Origin's space tourism program. The company's webcast touted that interested viewers should get in touch about booking a spot on a future Blue Origin flight. Two more flights are scheduled for 2021.