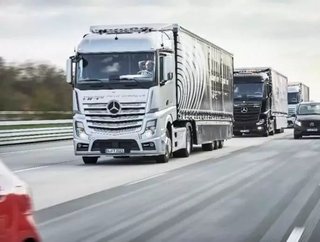 Lorries on motorways will soon be able to travel in a regulated convoythat all brake, accelerate and steer in synchronisation thanks to new wireless tec...

Lorries on motorways will soon be able to travel in a regulated convoy that all brake, accelerate and steer in synchronisation thanks to new wireless technology trials.

The £8.1mn project approved by the government was announced on Friday, August 25, and will potentially see up to three heavy goods vehicles travelling together, with the lead vehicle controlling the speed and braking.

All vehicles will have a driver ready to take the wheel at any given time, whilst it is hoped the idea could make the vehicles more efficient and lower emissions.

"We are investing in technology that will improve people’s lives," commented Transport Minister Paul Maynard.

"Lorry platooning could benefit businesses through cheaper fuel bills and other road users thanks to lower emissions and less congestion."

The trial will be conducted by the Transport Research Laboratory, with funding provided by the Department for Transport and Highways England.

Jim O'Sullivan, Highways England's Chief Executive, said: "Investing in this research shows we care about those using our roads, the economy and the environment, and safety will be integral as we take forward this work with TRL."

Trials are expected to begin on major roads by the end of 2018, but not everyone has been receptive to the idea - Edmund King, president of the AA, raised concerns.

"We all want to promote fuel efficiency, but we are not convinced that lorry platooning is the way to go about reducing congestion."

"This strategy may work on the miles of deserted freeway in Arizona or Nevada but we have some of the busiest motorways in Europe with many more exits and entries."