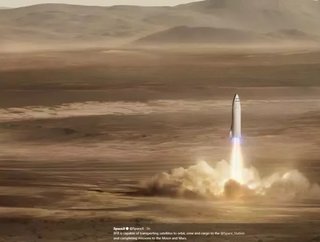 SpaceX founder and CEO Elon Musk has revealed his plans to colonize Mars by pumping all of its resources and revenue into the project. Speaking at the...

SpaceX founder and CEO Elon Musk has revealed his plans to colonize Mars by pumping all of its resources and revenue into the project.

Speaking at the Internation Astronautical Congress - which he preempted by tweeting that he would reveal "something really special" - Musk detailed his idea of an interplanetary rocket that could travel around the world in under an hour.

Musk's Interplanetary Transport System (nicknamed BFR) that would be used to travel to Mars and the Moon, as well as travel a variety of routes across Earth for the same price as an economy airline ticket.

In a video demonstration, passengers boarded a boat in New York City that took them to an offshore launch platform, before travelling at 27,000km/h and landing at their destination in Shanghai 39 minutes later.

Musk himself said, however, that the most important point of the whole project is figuring out how to pay for it.

"We think we've found a way to do it. We think we can fund this," Musk announced.

"We believe we can build BFR with the revenue we receive from launching satellites and servicing the space station."

"This system would cannibalise our own products. It would make the Falcon 9, the Falcon Heavy and the Dragon all redundant. All of that resource would then be applied to this system. That is fundamental."

The project timeline for a Mars mission has actually been boosted and accelerated - last year, Musk predicted a mission to the Red Planet would happen in 2024. Now, he says the first ITS ships would launch in 2022.

SpaceX would also use the new rocket system to run missions to the Moon, with US Vice President Mike Pence recently hinting that NASA may return there soon.

Beginning his speech by talking about becoming a multiplanet species, Musk said it is all about "believing that the future will be better than the past."