How Neuralink taught a monkey to play Pong with its mind 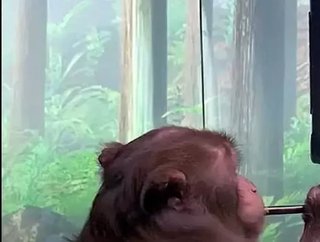 Potential real-world uses of Neuralink's brain-machine interface include enabling an individual with paralysis to operate a computer via brain activity...

Elon Musk’s neurotechnology company Neuralink, which is developing an implantable brain-machine interface (BMI), has revealed it has taught a monkey to play the game Pong with its mind.

Initially controlling a cursor with a joystick, the nine-year old Macaque Pager’s brain activity was monitored by two implanted neuralink devices, before the joystick itself was unplugged and control continued. The video’s narrator explained: “We're wirelessly streaming in real time the firing rates from thousands of neurons to a computer. Using these data, we calibrate the decoder by mathematically modeling the relationship between patterns of neural activity and the different joystick movements they produce. After only a few minutes of calibration we can use the output from the decoder to move the cursor instead of the joystick.”

Potential real-world uses of the technology include enabling an individual with paralysis to operate a computer or phone via brain activity alone.

Neuralink last broke cover in August of last year, with a progress update detailing some of its advances, including the live projection of a pig named Gertrude’s brain activity via an implant. Some criticised the event for simply repackaging existing technology in a showier form.

The company’s overall ambition was laid out in a 2019 scientific report, which outlined the company’s initial approach, which has since evolved to become wireless, saying: “Brain-machine interfaces (BMIs) hold promise for the restoration of sensory and motor function and the treatment of neurological disorders [...]. We have built arrays of small and flexible electrode “threads”, with as many as 3,072 electrodes per array distributed across 96 threads. We have also built a neurosurgical robot capable of inserting six threads (192 electrodes) per minute.”

Neuralink is far from alone in the space, with competitors including Facebook’s CTRL-Labs. Their product - in contrast to Neuralink - is non-invasive, taking the form of an armband with potential uses as a virtual reality control system.