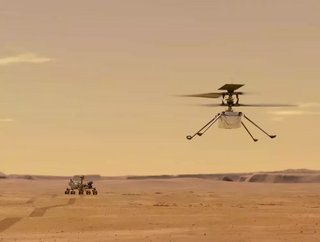 Its first successful flight came last week, involving take off, a 20-30 second hovering period followed by a landing. Ingenuity is set for a series of test flights over the next 30 Martian days, each of which are 37 minutes longer than here on Earth.

Due to the project’s status as a tech demo for the possibilities of future aerial mobility on the Red Planet, NASA’s engineers are unafraid of pushing the technology to its limit, with even a crash returning useful data.

Achieving powered flight on mars is exceedingly difficult, and not just because of the extreme distances involved. That fact means anything approaching real-time communication is impossible. NASA’s solution, therefore, is to empower the drone to react to conditions on Mars autonomously. There’s also the extremely tenuous nature of the atmosphere, with a surface pressure of less than 1% of the Earth’s. While that’s offset by the lower gravity, the drone has necessarily been constructed to prioritise lightness.

Håvard Grip, Ingenuity Mars Helicopter Chief Pilot at NASA's Jet Propulsion Laboratory, said of the third flight: “Our plan from Day One has been to prepare like crazy, fly, analyze the data (like crazy), and then plan for an even bolder test in the next flight.

“We're being cautious with each new foray in the skies of Mars as we continue to build confidence in the capabilities of this new exploration platform. For the third flight, we're targeting the same altitude, but we are going to open things up a bit too, increasing our max airspeed from 0.5 meters per second to 2 meters per second (about 4.5 mph) as we head 50 meters (164 feet) north and return to land at Wright Brothers Field. We're planning for a total flight time of about 80 seconds and a total distance of 100 meters (330 feet).”