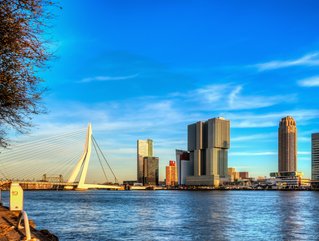 With the European Project RUGGEDISED, the City of Rotterdam is working to produ...

With the European Project RUGGEDISED, the City of Rotterdam is working to produce a neighbourhood where the thermal energy needed is produced, shared and used locally through a smart grid.

Energy production comes in many forms and sizes, but in the Hart van Zuid (Heart of South) district in the Dutch city of Rotterdam, perhaps more so than elsewhere. As the lead partner – a so-called Lighthouse City – in a smart cities project funded by the European Union, the city works to extract thermal energy from wastewater, pavements, ponds and streams in the surrounding area, and even from dancing people!

On their own, none of the technical solutions are new, but the grand scale of the implementation, how the city combines it with other ambitions for the neighbourhood, and the many different sources feeding into the same grid, is a first of its kind, explains Katelien van den Berge, Project Manager for RUGGEDISED in Rotterdam. “We are pooling the technologies available for sustainable thermal energy production to make a greater whole,” she says. “The Project is about mixing advanced solutions with available sensor technology and deploying it together in order to make it ‘smart’. The municipality is working closely with private partners and research institutions to make sure Hart van Zuid becomes one of the most sustainable parts of Rotterdam.”

The smart grid in Rotterdam is centred around thermal solutions and their connection to a smart thermal grid using pipes to transport heating energy down to, and up from, wells in the aquifer level underground. Depending on the season, the thermal smart grid deployed will be capable of collecting both heating and cooling from various sources. The redistribution of the energy can happen instantly through the smart grid, or after a period of being stored in the aquifer thermal energy storage below ground.

One source of energy to the system comes from extracting energy through warm wastewater and surface water from ponds and streams. Heat exchangers recover the heat of the water which, especially in summertime, can reach high temperatures. The warmth can then be used directly or stored in the geothermal heat-cold storage for later use.

Residents and businesses in the area will also be able to use thermal energy collected from the streets they are walking on. Tubes will be integrated in the asphalt layer of the pavement with cold water pumped through to capture heat energy from the pavement which can itself reach up to 65°C on a summer day. “The tubes deployed beneath the asphalt are not just useful in summer but give us the added benefit of being able to heat up the asphalt a few degrees during winter by pumping warmer water through them. By using the heat created elsewhere in the system we will have enough energy to keep the pavement ice-free on otherwise cold days,” explains van den Berge.

Another less traditional energy source to be exploited in Rotterdam is through the capture of thermal energy from people moving. Hart van Zuid is an area full of large-scale buildings, including the 16,500-capacity indoor arena and convention centre ‘Rotterdam Ahoy’ which will host Eurovision – the European Song Contest – in 2020. The Rotterdam Ahoy is one of the buildings connected to the neighbourhood’s smart grid, and the heat pumps installed will be able to both add to, and use from, the heating or cooling stored in the smart grid. “Thousands of people dancing the night away produces a tremendous amount of energy we will now be able to use in other buildings in Hart van Zuid. Typically, this energy has been wasted and lost through big air conditioning systems using energy instead of generating it. With the smart thermal grid we can support Rotterdam Ahoy with cooling during their big shows and they can provide heat energy back into the loop,” say van den Berge.

The efforts made in Rotterdam’s Hart van Zuid also include large-scale deployment of photovoltaics, with up towards 16,000 m2 of solar panels being deployed at Ahoy and other rooftops in the area. For the time being, due to legal limitations, the power produced by the photovoltaics is not fed directly into the shared system of energy; it is used by the individual building where it is produced or for specific purposes, such as powering electric buses.

Partnering with industry for a common goal

The work done through RUGGEDISED in Rotterdam is led by the municipality with crucial support from private partners. The energy utility Eneco, and Ballast Nedam, a development and construction company, are partners in the project itself while the convention centre Rotterdam Ahoy and the construction company Heijmans are dedicated affiliated partners.

For the partners, an important part of the smart grid is its ability to lower the overall use of energy. Large air conditioning systems and heating systems could potentially be powered by solar energy or fossil fuels, but the thermal grid allows the buildings to adapt to changing circumstances without the need for a large external power supply.

Reducing energy consumption is one of the biggest benefits RUGGEDISED brings for private partners, and a big reason for the City of Rotterdam to work on the smart thermal grid. “Our ambitions for the smart thermal grid are larger than placing sensors, deploying pipes and installing heating pumps to save energy for the buildings in our network. We want to prove to everyone that building a shared system of thermal energy can lower overall energy use and that it provides a good business case for everyone involved. Working as closely as we do with private partners forces us to prove our commitment to sustainable business plans and it makes upscaling and replication both in Rotterdam and around the world much more likely,” van den Berge says.

Upscaling is already underway in Rotterdam, where several large facilities in the neighbourhood, including a hospital, have expressed an interest in being connected to the smart grid.

RUGGEDISED is a smart city project funded under the European Union’s Horizon 2020 research and innovation programme. It brings together three lighthouse cities: Rotterdam, Glasgow and Umeå and three fellow cities: Brno, Gdansk and Parma to test, implement and accelerate the smart city model across Europe.