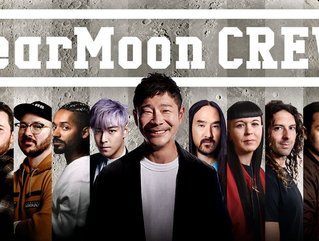 Japanese billionaire Yusaku Maezawa has named the eight crew members and two backup crew selected for dearMoon, the first all-civilian project to fly around the Moon aboard Starship, a rocket developed by Elon Musk’s SpaceX.

Maezawa - who stayed on the International Space Station (ISS) in December 2021 - put out a call on the official dearMoon website for the opportunity of going to space to more diverse talents in March last year and received more than a million applications from 249 countries and regions.

"We received applications from about one million people from all around the world… [The crew] are all fantastic people," says Maezawa.  "There isn't a set task for each of them, but I hope each crewmember will recognise the responsibility that comes with leaving the Earth... They will gain a lot from this experience, and I hope they will use that to contribute to the planet, to humanity."

"The entire SpaceX team is excited for these extraordinary people to join the dearMoon mission," says Jessica Jensen, SpaceX Vice President of Customer Operations & Integration. "We look forward to flying this crew of artists, content creators, and athletes from all around the world who will travel within 200 km of the lunar surface as they complete a full journey around the Moon before safely returning to Earth."