Budget robots inspired by animals a step forward for humans 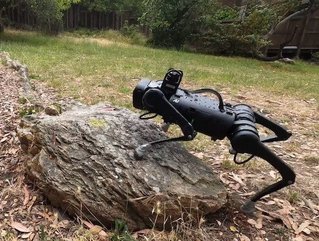 Researchers at Carnegie Mellon University's School of Computer Science and the University of California have designed a system that enables a small, low-cost robot to climb and descend stairs, traverse uneven and varied terrain, walk across gaps, and even operate in the dark.

The research could be a step toward solving existing challenges facing legged robots and bringing them into people’s homes, say researchers. A paper supporting the research - Legged Locomotion in Challenging Terrains Using Egocentric Vision - will be presented at the upcoming Conference on Robot Learning in Auckland, New Zealand.

"Empowering small robots to climb stairs and handle a variety of environments is crucial to developing robots that will be useful in people's homes as well as search-and-rescue operations," says Deepak Pathak, an Assistant Professor at Carnegie Mellon’s Robotics Institute. "This system creates a robust and adaptable robot that could perform many everyday tasks."

The team tested the new robot on uneven stairs and hillsides at public parks, challenging it to walk across stepping stones and slippery surfaces and climb stairs that would be similar to a human leaping over a hurdle. The robot adapts quickly and masters challenging terrain by relying on its vision and a small onboard computer, say researchers.

Six years of traning into one day

A simulator was also used to train the robot with 4,000 clones, where they also practised walking and climbing on challenging terrain. The simulator's speed allowed the robot to gain six years of experience in a single day. The simulator also stored the motor skills it learned during training in a neural network that the researchers copied to the real robot.

The robot’s new system bypasses the mapping and planning phases used in previous approaches and directly routes the vision inputs to the control of the robot. What the robot sees determines how it moves, say researchers. The robot can be produced more cheaply because there is no mapping or planning involved and movements are trained using machine learning.

"This system uses vision and feedback from the body directly as input to output commands to the robot's motors," says Ananye Agarwal, an SCS PhD student in machine learning. "This technique allows the system to be very robust in the real world. If it slips on stairs, it can recover. It can go into unknown environments and adapt."

The team looked to nature for elements of the system, with inspiration coming to them in the way a human has to lift its leg up high to scale a ledge or hurdle and from the movement of hind legs by four-legged animals. "Four-legged animals have a memory that enables their hind legs to track the front legs. Our system works in a similar fashion," says Pathak.