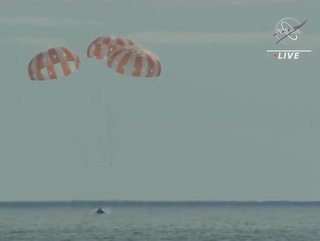 NASA's Orion spacecraft splashed down in the Pacific Ocean yesterday after a record-breaking mission, travelling more than 1.4 million miles on a path around the Moon and returning safely to Earth as part of the Artemis I flight test.

Artemis I was the first integrated test of NASA's deep space exploration systems - the Orion spacecraft, Space Launch System (SLS) rocket, and the supporting ground systems - and was supported by thousands of people around the world, from contractors who built the spacecraft and rocket and the ground infrastructure needed to launch them, to international and university partners, to small businesses supplying subsystems and components.

This weekend’s splashdown is the final milestone of the Artemis I mission that began with a successful liftoff in November at NASA's Kennedy Space Centre in Florida.

NASA is working with many heavyweight private sector companies to deliver space technologies and ground system operations to take humans back to the Moon and eventually to Mars. These include Orion, the first spacecraft in history capable of carrying humans on long-duration missions in deep space, for which NASA’s prime contractor is Lockheed Martin Space Systems Company; and the Space Launch System (SLS), designed for crew, cargo, and science missions, on which NASA is working with contractors including Aerojet Rocketdyne, Boeing, and Northrop Grumman.

At the agency’s Kennedy Space Centre in Florida, Exploration Ground Systems (EGS) is adapting existing infrastructure and facilities to modernise NASA’s lunar spaceport capable of launching spacecraft built and designed by both NASA and private industry. NASA’s prime contractor for EGS is Jacobs.

NASA Prime Contractors Aerojet Rocketdyne, Boeing, Jacobs, Lockheed Martin, and Northrop Grumman currently have over 3,800 suppliers contributing to Orion, the SLS rocket, and the lunar spaceport at Kennedy. With NASA investments, additional US companies, including small businesses, are advancing technologies and systems needed for a sustained presence on the Moon by 2028.

"The splashdown of the Orion spacecraft – which occurred 50 years to the day of the Apollo 17 Moon landing – is the crowning achievement of Artemis I,” says NASA Administrator Bill Nelson. “From the launch of the world's most powerful rocket to the exceptional journey around the Moon and back to Earth, this flight test is a major step forward in the Artemis Generation of lunar exploration. It wouldn't be possible without the incredible NASA team.

“For years, thousands of individuals have poured themselves into this mission, which is inspiring the world to work together to reach untouched cosmic shores. Today is a huge win for NASA, the United States, our international partners, and all of humanity."

During the mission, Orion performed two lunar flybys, coming within 80 miles of the lunar surface. At its farthest distance during the mission, Orion travelled nearly 270,000 miles from our home planet, more than 1,000 times farther than where the International Space Station orbits Earth, to intentionally stress systems before flying crew.

"With Orion safely returned to Earth, we can begin to see our next mission on the horizon, which will fly crew to the Moon for the first time as a part of the next era of exploration," says Jim Free, NASA Associate Administrator for the Exploration Systems Development Mission Directorate. "This begins our path to a regular cadence of missions and a sustained human presence at the Moon for scientific discovery and to prepare for human missions to Mars."

Before entering the Earth's atmosphere, the crew module separated from its service module, which is the propulsive powerhouse provided by ESA (European Space Agency). During re-entry, Orion endured temperatures about half as hot as the surface of the Sun at about 5,000 degrees Fahrenheit. Within about 20 minutes, Orion slowed from nearly 25,000 mph to about 20 mph for its parachute-assisted splashdown.

During the flight test, Orion stayed in space longer than any spacecraft designed for astronauts has done without docking to a space station. While in a distant lunar orbit, Orion surpassed the record for distance travelled by a spacecraft designed to carry humans, previously set during Apollo 13.

"Orion has returned from the Moon and is safely back on planet Earth," says Mike Sarafin, Artemis I Mission Manager. "With splashdown, we have successfully operated Orion in the deep space environment, where it exceeded our expectations and demonstrated that Orion can withstand the extreme conditions of returning through Earth's atmosphere from lunar velocities."