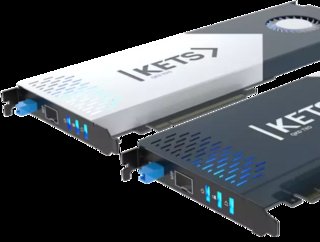 With quantum computing now accelerating development across the world, with it comes a whole wealth of possibilities and complexities. Essentially the result of computing getting smaller and smaller, in a sub-atomic realm where we move from bits to qubits, already creating computers that reach 100 million times faster than classical computers, such as the one announced by Google.

On top of this, they are also potentially hundreds of times more energy efficient, make decisions far quicker and optimise faster too. While they may not be a reality commercially just yet, the likes of Chris Erven, CEO of KETS Quantum Security, must prepare now for the impacts of quantum computing, particularly in the world of cybersecurity...

Can you tell me about your company?

What is your role and responsibilities at KETS Quantum?

I’m the CEO and one of 4 co-founders of KETS. At KETS, I lead the investment fundraising and commercial sales efforts. It’s quite an interesting time for the technology as more and more major players wish to trial the technology, which is perfect as we’re involved in a number of key testbeds and have our dev kits just launching. So at the moment, my responsibilities are educating investors and the market, developing interesting Proof-of-Concept projects with customers, and when I can find the time contributing some thought leadership pieces. Really though it’s a complete team effort. We’re a team of 14, actually 15 now! As well as having some interns and project students. It’s the team the does all the hard work and makes the magic happen.

What benefits do quantum technologies bring when looking to solve security issues?

Better security promises. The security of KETS’ solutions rest on security proofs that rely on the laws of physics as we know them being correct rather than the difficulty of certain math problems. That said, we are hardware which isn’t the solution for every problem. So we’re also partnering with other solutions providers so that our technology can contribute alongside others in a layered approach. This also is in line with the way cyber security is evolving – crypto-agility is the name of the game – easily being able to swap in and out solutions and layer them for the best protection. The huge benefits this opens is enabling a variety of new applications that just weren’t possible before because of security concerns. And this is just the beginning. To start with, we’re focused on securing the most high-value classical communications links and data. But as you look farther into the future, we’ll soon have connected quantum computers and a quantum internet. Before long, we’ll be wanting to send secure quantum bits, qubits, not just classical bits. And we think we’ll have a part to play there as well

Why do you think it is important for organisations to adopt quantum technology solutions to help with their security issues?

Two reasons. First, quantum computers are no longer an 'if', but a 'when'. With the huge investments which the likes of Google, IBM, PsiQuantum, and others are making – they’re coming. And while this is great for developing better drugs and more efficient fertilisers, it’s not so great for our current, convenient cryptographic algorithms as quantum computers are tailor-made to crack them. Worse, we’ll likely never know when 'Q-Day' happens. Quantum computers represent such a strategic asset that, like the Enigma code breaking machines, we likely won’t learn for many, many years about the day when a state-level actor develops a quantum computer capable of breaking our current cryptosystems and turns it on. And second, because as soon as organisations start looking into it they’ll quickly realise that it will take them much, much longer than they thought to adopt quantum technology solutions and make themselves quantum-safe. This is not a 1 to 2 year project, most, including us and organisations like NIST, put it at a 5 to 15 year transition period at the minimum.

What can we expect from KETS Quantum in the future?

At the moment we’re focused on three things: completing the small volume production of first dev kits, trialling them in Proof-of-Concepts with the key customers that we have lined up, and continuing to build our world-leading team. But always in the background is new functionality and capabilities in our R&D pipeline that we want to bring to market. So pretty soon we’ll be fundraising again to scale production to meet the exponentially increasing demand and bring new products to market.