"People who look after people" is the concept that encloses the spirit of MAPFRE.

A multi-sector insurance company with presence in 100 countries of the five continents, MAPFRE was born in Madrid in 1944 to insure workers on Spanish farms. Subsequently, the company expanded to Latin America and then to Turkey, Indonesia, USA, Brazil, Italy and Germany. Today, it is one of the leading insurers in Latin America, has more than 37mn customers and more than 37,000 employees in 5,400 offices.

Its impressive digital transformation is an example of how a solid leadership based on the right strategy manages to use technology as a channel to achieve great goals.

Gigabit had the pleasure of interviewing Juan Cumbrado, Chief Information Officer (CIO) and Chief Process Officer (CPO) of MAPFRE LATAM Norte, about this integral process of digital transformation that he is leading.

A witness to great transformations

"MAPFRE is defined as a company of people that help people and that is evident in its management model, in its relationship and in the attitude that we demonstrate every day. With these principles and our passion, the time I have spent in the company has flown by," begins Cumbrado.

The CIO/CPO joined MAPFRE 20 years ago as Director of Systems Engineering and has worked in almost all areas of the company. In 2013, his opportunity came to move out of Spain and become the CIO and CPO of MAPFRE LATAM Norte with a focus on Mexico, taking the company's operations to the next level in the region.

He has lived moments of vital importance in the company: mergers, acquisitions, the internationalisation of MAPFRE and the beginnings of globalisation. He has also been a key agent in the creation of the corporate technology and process team that today is one of the three support units of the group worldwide.

As regards his role, his biggest responsibility or challenge has been based on the digital transformation of the northern region of Latin America, coordinating and integrating it within a global strategy. These efforts have been rewarded with the 2018 HITEC50 recognition by HITEC, the global executive leadership organisation.

"We are implementing Agile methodologies in business projects and, of course, in projects in the technological field, which allows us to have two workspaces in the OpenSpace environment for the region. That is the area in which I am developing my activity at this moment".

The insurance industry and the need for digitalisation

As a result of the fourth industrial revolution, digitalisation is giving the customer a privileged position.

Cumbrado identifies digital transformation as the key for insurance companies to offer new products with faster, more efficient and simpler cycles and services with automation as a basis, as well as the improvement of accident prevention and prevention schemes.

"MAPFRE and the insurance companies are obliged to get involved in a digital transformation because this will allow them to have new business opportunities, and they will see an improvement in operation, productivity and in the new business environments that are about to appear," analyses Cumbrado.

Given this scenario, MAPFRE built its digital transformation in two axes: technology and people, with a strategic focus on operational improvement for the customer.

As pointed by Cumbrado, the key to the success of MAPFRE's digital transformation has been the ability to work with distributed teams, defining a technology strategy and global processes, as well as the coexistence between the global corporate needs and the regional needs of each country.

From this base, the strategy has been deployed in all the countries where MAPFRE operates in Latin America, adapting to the singularities of each one. Big data and analytics have been essential elements to understand consumers, the penetration of new products and services, the definition of advanced rates and pricing models and the location of points of assistance where there is greater road circulation.

Likewise, thanks to big data and analytics, MAPFRE is developing a 360 view of its clients that allows interaction through different physical and digital media in order to respond accurately to segmentation. This approach takes into account the fact that a person can vary in social and work positioning in the course of a single day.

MAPFRE has also developed its own software, implemented to periodically audit and monitor the alignment of operations with the global digital transformation strategy. In total, approximately 660 projects have been developed to streamline operations based on global intranet connectivity and distributed in different countries.

Culture shift in the company

Of course, the digital transformation in MAPFRE is bringing changes related to organisation and work culture.

Cumbrado offers us his vision in this regard: "Without a doubt, this is a relevant moment in the organisations, since three generations coexist at the same time. In the traditional model, the bosses were older people who had the highest level of knowledge, but now the dynamics have changed. We have to learn that people with more experience can have bosses much younger than them and age does not necessarily reflect experience and knowledge. This is a matter that must be worked on at MAPFRE and in all the companies that are facing this transformation.”

To which he adds: "In MAPFRE we are working on this change of organisational culture, which ranges from matters as basic as the rules of etiquette. Not only is it enough to take off your tie, for example, there must also be a change of attitude, because the tie is only a symbol.”

Cumbrado offers his expert opinion to companies that seek to carry out a digital transformation, summarising the process in three fundamental stages.

First, finding the right sponsor and defining a clear strategy, analysing the fundamental pillars so that the critical areas benefit from the digital transformation. Second, dividing it into stages and finding the specific technologies to be implemented in accordance with their policies. Finally, Cumbrado emphasises the importance of having a final goal parallel to the current moment of the company and working with indicators to monitor the process.

In addition to his work at MAPFRE, Cumbrado collaborates with Startupbootcamp, where he works with startups and accelerators in innovation projects. This collaboration with other people and technologies is enriching work for him as he is expanding his technological knowledge, which undoubtedly has a positive impact on MAPFRE. "It's helping me a lot to understand that simplicity is a viable way to face and solve problems," he concludes. 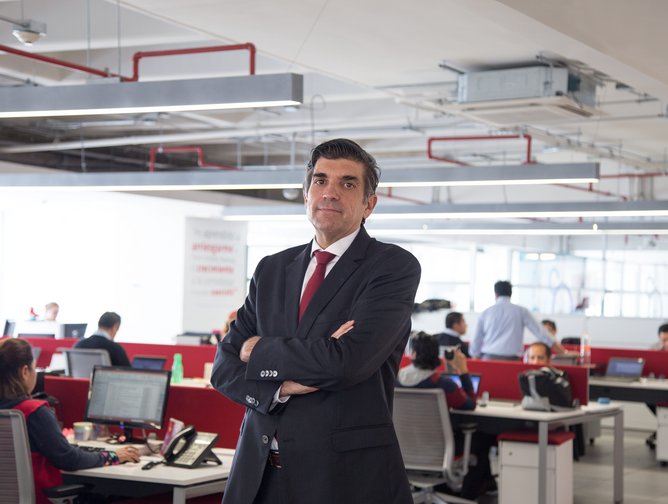 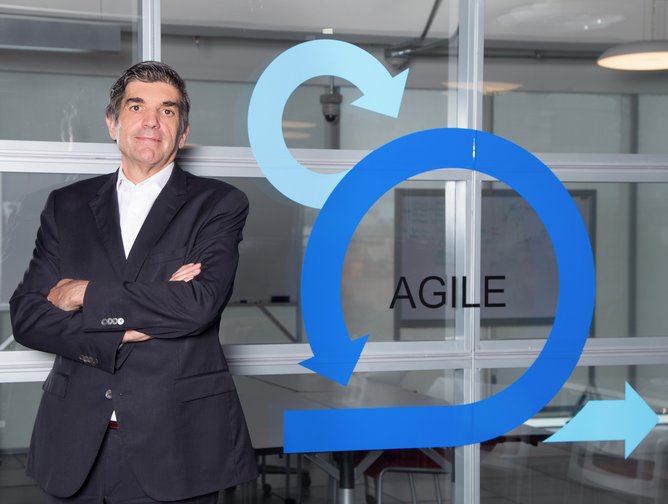