Each day, Abellio UK delivers rail and bus services to over 1.2 million passengers in Scotland and England—keeping well-worn travel routes running smoothly. The COVID-19 pandemic, however, forced the company to pursue rapid digitalisation. “There was very much a change in direction”, Graham Davies, Head of Transformation, said. “Everything shifted with passengers locked down, commuters not travelling, and nobody going to the office”.

Davies originally started out in finance. After working in multiple European and international accounting operations, however, he took charge of Abellio’s digital transformation, a role Davies sees as an extension of his previous role. “Finance is always part of transformation”, he said. “Finance is always looking at making things better and creating change. For me, it was a natural step of moving away from the month-by-month processing of accounts and moving forward to the long-term business change”.

Many leaders get caught up in the minutiae of damage control and managing day-to-day operations. Yet Davies has managed several very large, successful strategic initiatives, such as overhauling Abellio Bus’ entire financial department from budgeting to reporting. What’s the secret to success?

“We hear a lot about leading from the front”, Davies said. “[But] I think it’s critically important that you listen to all the individuals who are going to be affected by the changes—not just the senior management teams, but the employees on the ground”. For Abellio UK, a company that’s 16,000 employees strong, he added, “it’s definitely a mindset to listen to those people and think about how things could be done differently. Instead of hearing complaints, we should listen for challenges and opportunities”.

This mindset seems to take centre stage in Abellio’s operations. Instead of accepting corporate confusion as part of the pandemic, the company strives to eliminate ambiguities that stand in the way of effective digital transformation. With Abellio, Davies notes, he’s taken a data-focused approach to improving workflows and increasing long-term profits. What remains critical is a “single, data-driven view of the truth”.

Often, companies waste hundreds of hours comparing data from sources that seem identical but display differing numbers, metrics, and conclusions. “Somebody understands something one way”, Davies said, “and somebody else understands it another. We can’t run businesses like that. We need to have consistency”. As a leader who has worked across international boundaries and cultural norms, he knows firsthand the importance of a common language.

To centre Abellio’s operations around trusted data, Davies developed and implemented a strategy to provide level-two data analytics within the company’s operations, engineering, and performance departments. “What we’re really aiming for”, he told us, “is not just the backwards-looking descriptive analytics, which say, ‘This happened yesterday.’ We want the diagnostic level, which answers, ‘Why did this happen yesterday?’”

For example, the Abellio team recently analysed the attrition rates of their bus drivers. In their industry, especially during a global pandemic, it remains highly difficult to retain employees. “We looked at what affected those attrition rates”, Davies said, “to try to find out what commonalities the leavers had”. While correlation does not imply causation, the company found that bus drivers who lived further away from the Depot left much more frequently than those who lived closer. This enabled Abellio to target its recruitment efforts, effectively mitigating driver losses before further issues emerged.

In addition, Abellio leveraged real-time APIs that were available through Transport for London (TfL) and used cloud storage through Snowflake. The company put visualisation through Tableau, used Python for select processes, and relied on a broad suite of robotic process automation (RPA) tooling. Yet Davies is a big believer in low-code solutions. “It’s a horses for courses situation”, he said. “There’s no one tool to rule them all. You have to find the right solution for the right problem”.

At Abellio, Davies is continuing to eliminate contradictory and confusing data analytics. To do so, he’s designed data flows from source to storage to visualisation—obtaining quality data from individual silos and aggregating it in one place. “We put our metrics into a single storage space at the centre of our cloud”, he explained, “and then we link those data sets together. We might talk about a bus over here, and a driver over there, but if we’re not joining them together, we’re losing both insight and value”.

Yet Davies emphasised that the trajectory of a company’s digitalisation depends on its situation. He pointed out that many transport companies are legacy companies with many manual processes. “It’s all too easy”, he reminded us, “to think, ‘Oh, I’ll plan out this wonderful digital transformation that’ll include predictive and prescriptive analytics because that’s the future’. But if you don’t have your level one descriptive reporting in place, how are you ever going to make those changes?”

After all, as the pandemic has taught us, entire companies, countries, and cultures can change in a matter of months. “Start small, but keep going”, Davies advised. In 2020, new pandemic regulations meant that Abellio had to adjust rapidly—often on a weekly basis. “What was really important for us”, Davies said, “was quickly developing schedules that reported when buses were running, how frequently they arrived, and when we needed drivers”.

When asked how he thinks digitalisation will impact Abellio, Davies immediately focused on digital transport tracking. “We want to have buses that are well-connected not only to enable passengers to understand that they don’t have to wait outside in the cold or the rain at the bus stop”, he said, “but also for operators to be able to maintain our vehicles at top-notch quality”.

Post-pandemic, Davies thinks we’ll maintain contactless payments and move towards a cashless society, but that working from home will eventually transition to a hybrid solution: part-time in-office, part-time remote. “I still think it’s critically important that individuals get to spend time face-to-face”, he said. “Those micro-conversations that you find in offices are really where the inspiration for ideas comes from”.

And Abellio has no shortage of ideas for the future. Currently, about 55% of the company’s 800 single- and double-decker buses are hybrid vehicles, relying partly on batteries and partly on diesel. By the end of the year, the company will almost double its pure electric fleet. Said Davies, “we’ll increase the percentage from 4% to 8%”.

As usual, the task will have its challenges. “One of the massive difficulties”, Davies admitted, “is that we’ve got to maintain our charging schedules and build the infrastructure with limited space”.
Yet if Abellio UK has its way, those difficulties won’t stand in the way of necessary change. As Davies put it, 175 years of public transport experience has left the company with a social duty to its passengers. As a result, Abellio seeks out dedicated suppliers who clearly have a passion for what they do. “Our company and our suppliers”, Davies said, “have the same aims: to create a sustainable future for public transport, the environment, and passengers—not only for the industry but for society as a whole”. 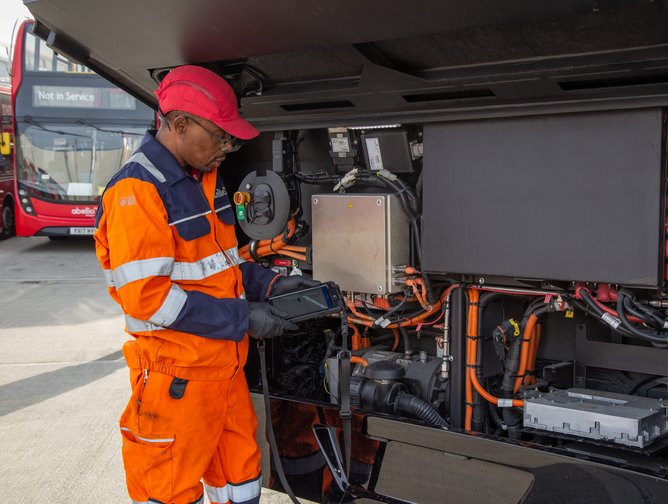