As CIDO, Petty’s organisation is responsible for the launch of new products and services, driving increases in velocity and speed and leveraging new development capabilities and platforms to make sure they drive growth.

Regarded as a digital enabler for society and becoming more prevalent throughout the COVID-19 pandemic, Vodafone plays a critical role in enabling digital services for consumers, the economy and the public sector.

Petty is proud of the role Vodafone has played in keeping economies connected and functioning well: “In these difficult times, we are taking the opportunity to build platforms that move beyond connectivity. We have the world's leading connectivity services platform for IoT, which connects things to our network. Not just on the Vodafone footprint but everywhere around the world. Equally in Africa, we've built a fantastic financial services capability around M-Pesa, connecting people and allowing money transfer and transactions for unbanked Africans to leverage those services. Another example is Vodapay in South Africa, which is a partnership with AliPay, where we launched a super app and lifestyle services, as well as financial management for customers on the Vodacom network, so even customers on with other operators can access a new set of lifestyle and digital services that ultimately grows our customer base. So we have a couple of good examples where that platform strategy is working. Our focus now is how do we extend that further into new areas like 5G and to mobile edge computing (MEC) and new services we'll be launching over the future.”

Part of Vodafone’s digital enabler strategy, Petty has overseen the shift from a market by market model to a single technology team across Europe - incorporating networks, digital and cybersecurity. In the product development areas, Petty’s responsibility is to lead the digital and IT teams; bringing everyone together to build scaled, shared platforms, reusing code and capabilities and ensuring the business moves at pace to launch new services at speed across all of their footprint.

“It's a large team of about 15,000 people across our organisation. We run a mixture of onshore, people in our markets very close to our customers, developing solutions for our customers in markets, and we've built a distributed development model, enabling them to contribute to the whole Vodafone community across Europe and near shore strategy. We opened centres, primarily in Europe, to help us get access to talent and build great services for digital inside the European footprint.”

Offshore is also a key strategy according to Petty, with the strategy “leveraging our great centres in India, Egypt and Romania, where we've been investing considerably over a period of time to build shared services that we can offer to all of our markets.” he said.

Petty remarks that “our goal is to be 60% insourced, 40% outsourced over the next couple of years, which will enable us to bring in software engineers to build our own platforms and take control of our technology, which will be critical to us as a digital enabler in the economy. We've announced that we'll be continuing that insourcing strategy. In fact, adding more than 7,000 software engineers to our organisation over the next three years to really make sure that we have the development skills we require to create, scale and build new platforms, which ultimately create new sources of revenue.” he said.

Vodafone have invested in very strong internal cyber security capability, with their own defence mechanisms, but also closely collaborate with NCSC and GCHQ in the UK to help their TBS capability.

“We've been early adopters of the technology security requirements, which is a new set of legislation, capabilities and regulations that we need to meet in the industry. GCHQ and NCSC test our defences. TBS is a migration of a capability from the financial services industry, called ‘Cbest’. We're really pleased with what we're learning from TBS and the interaction that we're having with NCSC to raise the bar on cyber security for not just us, but for all of our customers.” Petty said.

The Vodafone Foundation and making a social impact

The Vodafone Foundation is a charity organisation that Vodafone established to invest and bring the organisation's purpose to life. It invests in a number of projects to connect people to services that are in digital poverty; to drive education, both in Africa and in Europe, and to also invest in digital applications that improve society as a whole.

“We've made big investments in many markets, building applications like Bright Sky, for victims of domestic violence, to give them access to services and capabilities that weren't available before. We've run a number of projects with Imperial College London. We’ve run scientific research projects with our free DreamLab app, which runs computational analysis on cancer and COVID-19, making use of people's smartphones when they're asleep in bed. It has more than 2 million users around the world.” Petty continued.

The opportunities opened up by 5G

In regards to 5G, Petty claims that the industry is still in the early phases. Vodafone has been deploying ‘non standalone 5G’, which operates near 5G radios on base stations, but still leverages the 4G core network. When it comes to 5G, the primary benefit, according to Petty, is that the speed will increase and enhance other technologies: “The biggest next step is 5G standalone, where we stop using the 4G core network and only use the standalone 5G core network. This launches a whole set of new capabilities, leveraging ultra low latency which is really important for augmented and virtual reality applications. And I think you'll see a big focus in consumer and business on leveraging augmented and virtual reality with new devices coming next year.”

5G also offers network slicing - the ability to separate traffic in busy parts of the network to offer higher levels of quality of service or higher levels of security, depending on the application that's required and network’s licencing. Petty adds: “We'll create a whole range of new services from speed boosts for consumers to specific applications for smart factories, autonomous vehicles and security services. Another big benefit of 5G is MEC. We've launched a really exciting partnership with AWS that lets customers take workloads already running on AWS and pushes them to the edge of our network, into our computer nodes in our technology centres, which dramatically reduces the latency for those applications. We're seeing some great early examples in drone detection, systems, security systems and energy management systems leveraging those capabilities. 5G will be a key pillar in industry 4.0 initiatives around smart factories and smart buildings.”

Building strong partnerships with the leading hyperscalers such as Google Cloud, Microsoft and AWS is critical for Vodafone, through which they are jointly able to deliver innovative products and services.

As Petty explains, “that's really allowed us to take a big leap forward in our capabilities. With AWS, we've done a lot of work in building our digital platforms and scalability required to make digital a successful channel. It's already our largest channel, but continuing to have the greatest level of performance is really important. We use Microsoft in a number of areas as well.”

Partnerships with traditional vendors, particularly in BSS, are also important in terms of core transactional systems. Big investments have also been made in Google’s cloud-native technology suit as the whole ecosystem evolves to a cloud native world. 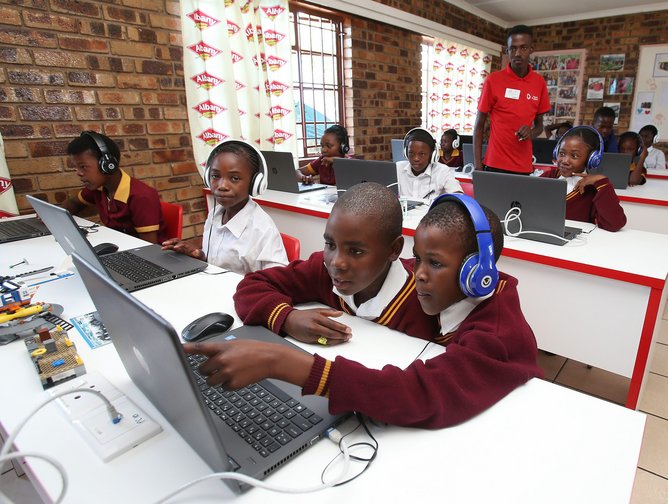