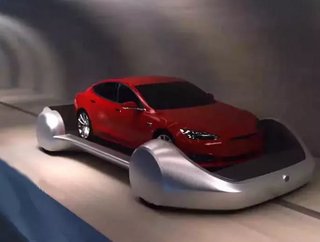 Elon Musk, founder of Tesla, has tweeted that his Hyperloop project has been given unwritten “verbal” approval from the US government to build its f...

Elon Musk, founder of Tesla, has tweeted that his Hyperloop project has been given unwritten “verbal” approval from the US government to build its first long-distance tunnel.

Hyperloop would run its first tunnel from New York to Washington, DC via Philadelphia and Baltimore – a 226-mile journey that currently takes over four hours by car but would be cut to just 29 minutes.

Musk admitted that there is still “work to be done” but would not disclose where the approval came from, although Bloomberg has reported that it came from inside the White House.

However, his announcement may have been premature – local government officials from DC and NYC have said that they are “unaware” of any contact with Musk and know nothing about the plans for the Hyperloop project.

Philadelphia spokesman Mike Dunn released a statement saying, “There are numerous hurdles for this unproven ‘hyperloop’ technology before it can become reality.”

“Elon Musk has had no contact with Philadelphia officials and we do not know what he means when he says he has received government approval.”

The White House’s Office of American Innovation, on the other hand, has confirmed that it has held “promising conversations” with Musk, but denied it had given approval, according to the Washington Post.

Running from “city centre to city centre”, the tunnel would have “up to a dozen” more entry and exit points along the route, Musk said in a series of tweets about the project.

Musk’s Boring Company recently announced that it was working on its first tunnel, which is thought to run under the SpaceX headquarters and to a car park opposite.

A series of cryptic tweets hinted at the development, just after the success of two back-to-back Falcon 9 rocket launches in one week.