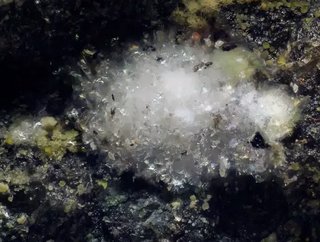 Abellaite and parisite-(La) are examples of new-to-science carbon-bearing minerals predicted before they were found, thanks in part to big data analysis...

Abellaite and parisite-(La) are examples of new-to-science carbon-bearing minerals predicted before they were found, thanks in part to big data analysis.

In a paper published by American Mineralogist, scientists report the first application to mineralogy of network theory – best known for analysis the spread of disease, terrorist networks, or Facebook connections.

The results are set to pioneer a potential way to reveal mineral diversity and distribution worldwide, their evolution through deep time, new trends, and new deposits of valuable minerals such as gold or copper.

“The quest for new mineral deposits is incessant, but until recently mineral discovery has been more a matter of luck than scientific prediction,” said Lead Researcher Shaunna Morrison of the Deep Carbon Observatory (DCO) at the Carnegie Institution for Science in Washington.  “All that may change thanks to big data.”

A vast amount of information exists on Earth’s more than 5,200 known mineral species – each of which has a unique combination of chemical composition and atomic structure.

Databases contain details of where each mineral was discovered, all of its known occurrences, and the ages of those deposits, alongside essential information on chemical compositions and a host of physical properties, including hardness and colour.

Until recently, Earth scientists didn’t have the necessary modelling and visualisation tools to capitalise on these giant stockpiles of information.

Now big data resources are offering new insight. The network analysis technique enables Earth scientists to represent data from multiple variables on thousands of minerals sampled from hundreds of thousands of locations within a single graph.

These visualisations can reveal patterns of occurrence and distribution that might otherwise be hidden within a spreadsheet. From those insights, it’s a relatively simple step to predict what minerals are missing from scientific lists, as well as where to go to find new deposits.

“I think this is going to expand the rate of mineral discovery in ways that we can’t even imagine now,” observed Robert Hazen, DCO Executive Director.

“Network analysis can provide visual clues to mineralogists regarding where to go and what to look for. We have used the same kinds of techniques to predict that at least 1,500 minerals of all kinds are ‘missing,’ to predict what some of them are, and where to find them.”

This has led to the creation of the Deep Carbon Observatory’s Carbon Mineral Challenge. Ten have been found so far. Parisite-(La) was discovered in Bahia, northern Brazil, while abellaite was found in Spain.

So far, the new minerals have no known economic applications

In the future, mining companies could use the technology to predict the locations of unknown mineral deposits based on existing data.