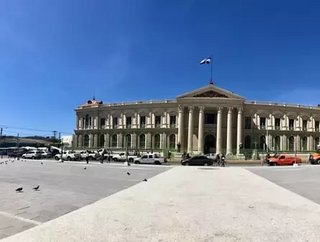 An opposition politician said the fall caused one of Latin America's poorest countries to lose $3m.

The rollout was far from what President Nayib Bukele would have envisaged when he began his bold experiment.

Platforms such as Apple and Huawei weren't offering the government-backed digital wallet, known as Chivo, and servers had to be pulled offline after they couldn't keep up with user registrations. But, as the day went on, Chivo began appearing on more platforms and was accepted by the likes of Starbucks and McDonald's.

The government has even given Salvadorans $30 each of Bitcoin to encourage its adoption. It says bitcoin could save the country $400m a year in transaction fees on funds sent from abroad.

However, using data from the World Bank and the government, the BBC calculates this to be closer to $170m.

"We must break the paradigms of the past," President Bukele had tweeted when he announced the bold move. "El Salvador has the right to advance towards the first world."

Ed Hernandez runs a family shop in San Salvador where customers buy essentials like rice, beans and cleaning products. He's well and truly on board.

"During the pandemic, it will be nice not to use physical cash," he told the BBC, adding that it protects him from customers paying with counterfeit notes.

What wasn't good timing for El Salvador though was the tumble Bitcoin took on its first day as legal tender, falling 20% at one point.

"It was a very bad day for President Bukele, his government and his Bitcoin experiment," opposition politician Johnny Wright Sol added.

"The majority of the population knows very little about cryptocurrencies. What we do know is it's a very volatile market. Today that was surely made manifest."

Mr Wright Sol said Bitcoin was not an apt national currency and was rushed through: "The Bitcoin law was approved in parliament with hardly any debate. It took only about five hours to go through.

"We're not cryptocurrency or Bitcoin haters, but we don't believe that it should be compulsory that businesses should be obligated to accept Bitcoin in payment.

"The state is backing these payments and assuming the risk but at the end of the day us taxpayers are all the state."

Public protests against the move

Mr Wright Sol isn't the only critic. More than 1,000 protesters gathered outside the country's supreme court, where fireworks were set off and tyres were burnt.

Beyond financial instability, some say the adoption of Bitcoin may fuel illicit transactions.

But Mr Hernandez, the shopkeeper, is not put off by the volatility: "I see it as a risk yes - but like everything in life, there's a risk. When we own a shop, sometimes we buy a product and we don't sell it.

"When others see a crisis though, I see an opportunity."