Defibrillator drones: what are the risks? 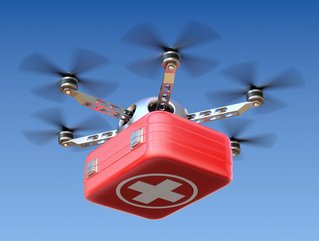 Various news sources reported yesterday that defibrillator drones may be brought into use by medical professionals in an effort to increase chances o...

Various news sources reported yesterday that defibrillator drones may be brought into use by medical professionals in an effort to increase chances of survival for cardiac arrest sufferers.

In tests, the drones have proven to be - on average - 16 minutes quicker to reach a patient than emergency services. Obviously, this could prove life-saving on a large scale.

This study was led by Jacob Hollenberg, Director of the Centre for Resuscitation Science at the Karolinksa Institute in Stockholm, and the trials involved a 12.5lb drone – developed by the Swedish Transportation Agency – carrying a 1.6lb defibrillator, and it was despatched 18 times over 72 hours to gauge its effectiveness. While much faster than official services, the drones are limited by short flight distances and variable air traffic patterns. A larger-scale trial will be required before Sweden is anywhere near to implementing this system.

A concern for Colin Bull, Principal Consultant Manufacturing and Product Development at SQS, these drones being hacked and rerouted by cyber criminals is an all-too-real possibility, and one that requires deep thought and strict regulations.

He said: “The news that drones carrying defibrillators could start saving lives by reaching people in need 16 minutes faster than emergency services may be a great step forward for rapid response medical care. However, it also highlights the need to protect vulnerable people from vulnerable, non-regulated technology. As with all connected technology, drones are at risk of falling into the wrong hands and in the race to reach patients, there is something standing in the way – cybercriminals. With the ability to reroute and even take down a potentially lifesaving drone, it is vital that measures are put in place to secure these flying machines from those with malicious intent so that they can continue on their paths to prevent potential deaths.

“One such step is to ensure software programming is considered more seriously in the development phase of a drone. This will make it easier for teams to use jamming devices of rogue drones. Also, the implementation of regulations and the standardisation of radio frequencies, on which drones operate, is vital. By ensuring strict regulations are in place the use, or misuse, of drones can be better controlled.

“Drones must be embraced and feared in equal measures. They might have the potential to save lives, but on closer inspection, the lack of security and regulation surrounding them is terrifying.”