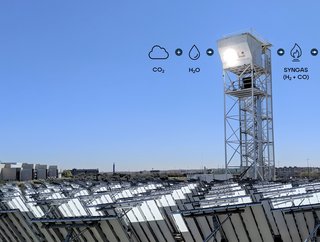 By 2030, Synhelion plans to produce 875 million litres of solar fuel, enough to cover about half of Switzerland’s jet fuel consumption.

Clean energy company Synhelion is a global pioneer in the field of sustainable solar fuels. Evolved from the Swiss Federal Institute of Technology in 2016 (a public research institute known as ETH Zurich), their mission is to decarbonise transportation with solar fuels. These fuel types can replace all types of fossil fuels as they are economically viable and fully compatible with existing global infrastructure.

Synhelion’s unique technology converts concentrated solar heat into the hottest existing process heat on the market, making it possible to drive an unprecedented number of industrial processes such as fuel production and cement manufacturing with solar heat. The company already works with international partners such as Lufthansa Group, Wood, Eni, and Zurich Airport.

The technology to produce solar fuels doesn’t compete for arable land with agricultural demand and has a smaller land footprint than other synthetic fuel technologies. As it requires desertic areas with plenty of sunshine, such land is available in many regions around the globe.

Synhelion plan to build their first commercial plant of solar fuels in 2022 and they are working together with materials manufacturer Cemex to decarbonise the global building industry too.

The aviation industry is currently responsible for about 2% of all human-induced carbon dioxide (CO2) emissions. To combat the climate crisis, these emissions urgently need to fall and the aviation sector needs to shift to climate-neutral technologies. Synhelion is a Swiss company producing solar fuels to decarbonise aviation. The company evolved from the Swiss Federal Institute of Technology (ETH Zurich) in 2016 and has developed a unique technology that uses concentrated solar heat to turn CO2 into fuel.

The aviation sector requires energy carriers with a very high energy density. Electric batteries are still far off reaching those, meaning that electrification won’t be able to decarbonise aviation soon enough. However, liquid drop-in fuels such as Synhelion’s solar fuels can. And they can be used without any adjustments to the existing global fuel infrastructure. Engines won’t need to be refitted. No new aircraft will need building. Airports won’t have to adjust their processes. Infrastructure can remain as it is and still flying becomes more sustainable by using solar fuels instead of fossil fuels. 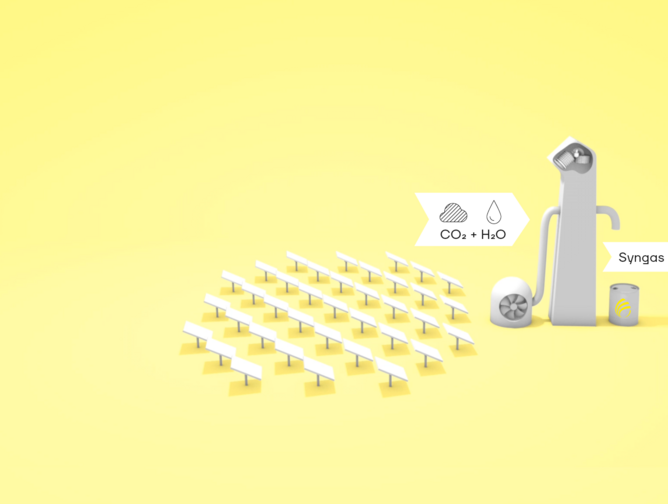 How is Syngas made?

Synhelion uses solar heat to convert CO2 into synthetic fuels. When the sun is shining, solar radiation is reflected by a mirror field, concentrated onto a receiver, and converted into high-temperature process heat. The generated heat is fed to the thermochemical reactor that turns CO2 and H2O into syngas, a mixture of H2 and CO. The syngas is then processed into fuels by standard gas-to-liquids technology such as the Fischer-Tropsch process. Synhelion’s technology can produce any type of hydrocarbon fuel: jet fuel, gasoline, diesel.

Synhelion has developed a thermal energy storage, so that the fuel can be produced around the clock and a high plant uptime is guaranteed. This means that the company will be able to offer solar fuels at competitive prices with fossil fuels. Thermal energy storage is much cheaper and environmentally friendlier than battery storage.

One decisive advantage of solar fuels is that the technology to produce them doesn’t compete for arable land with agricultural demand and it has a smaller land footprint than other synthetic fuel technologies. It requires desertic areas with plenty of sunshine. Such land is available in many regions around the globe. This means that it’s possible to scale the technology and cover global fuel demand, increasing access to clean energy and reducing energy dependence.

Last year, Synhelion raised CHF 16 million in its Series B. Co-Founder and CEO Dr. Gianluca Ambrossetti announced the following plans for the company: “We are using this funding to build the world’s first industrial-scale solar fuel plant at Brainergy Park Jülich in North Rhine-Westphalia, Germany. We will begin to produce solar jet fuel there next year”.