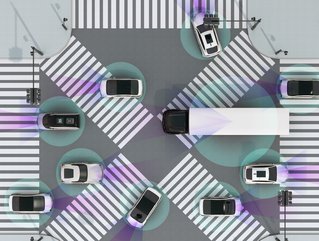 The US logistics industry has a problem. First documented in 2005, the nation’s trucking sector has been experiencing a...

The US logistics industry has a problem. First documented in 2005, the nation’s trucking sector has been experiencing a labor shortage, with the 2018 deficit reaching approximately 60,800 truckers. According to the American Trucking Association, the disparity between the number of truck drivers needed on the road and the number available could reach as high as 160,000 by 2028.

One way to solve the problem of not having enough people to support an industry is to reduce the number of people required. Allied Market Research reported last year that the global market for self-driving trucks is expected to exceed $1bn for the first time in 2020, and continue growing at a rate of around 10.4% each year until 2025.

As with a significant number of technologies that make their way into commercial and civilian use, the story of the autonomous truck begins in the military. In June 1995, Popular Science ran a story on the US Army’s partnership with Red Zone Robotics to develop and build self-driving trucks. Aimed at reducing driver error, overcoming the limitations of human endurance, and protecting soldiers from IEDs and other forms of attack, the Army planned to use its self-driving trucks to automate all but one vehicle in its convoys. “In a convoy, only the lead vehicle would be driven by a human. Each follower truck would use a satellite receiver, an inertial guidance system and ground-speed sensors to plot its course,” wrote Ray Nelson in the report. While the Army’s prediction that “self-driving convoy trucks could be on the road in as little as five years” proved optimistic, the problems the program attempted to solve have clear parallels to those being met by enterprise logistics chains today.

The possibilities of autonomous trucking extend beyond solving a labor shortage. A self-driving truck doesn’t get tired, doesn’t need to stop to eat and will obey road safety laws to the letter (in theory). According to the Allied Market Research report, the added predictability and interconnected behaviour of autonomous trucks could also lead to marked reductions in traffic congestion. The mass adoption of autonomous trucking could have myriad positive effects on the global supply chain, and completely change the future of overland transport.

With the market expected to explode over the next decade, Supply Chain Digital presents its top three companies currently leading the autonomous trucking revolution.

This week, logistics and packaging giant UPS officially publicised its ongoing partnership with self-driving vehicle startup TuSimple. UPS revealed that it has been using the startup to haul freight shipments between Phoenix and Tucson, Arizona, since May.

The investment will reportedly support continued exploration of the requirements for a successful autonomation of the company’s fleet.

“UPS is committed to developing and deploying technologies that enable us to operate our global logistics network more efficiently. While fully autonomous, driverless vehicles still have development and regulatory work ahead, we are excited by the advances in braking and other technologies that companies like TuSimple are mastering,” commented Scott Price, Chief Strategy and Transformation Officer at UPS.

UPS, which delivered a total of 5.2bn packages (that’s 20.7mn per day) in 2018, has a fleet of around 123,000 package cars, vans, tractors, motorcycles, including more than 10,000 alternative fuel and advanced technology vehicles. Even automating a small portion of its overland logistics capabilities would have a significant impact on the makeup of the US’ freight supply chain.

Founded in 2016, San Francisco-based startup Embark Trucks has quickly made its mark on the emerging industry. The company currently operates the longest automated freight route in the world and is reportedly the first autonomous trucking company to successfully operate cross country in fog and rain.

Staffed by a world-class team of robotics engineers with credentials from the likes of Ford, Google, Uber and Apple, Embark was co-founded by 23 year-old engineering prodigy Alex Rodriguez. In an interview with Forbes, Rodriguez explained that Embark’s trucks are designed “specifically for highways, which is what differentiates what we’re doing. We’re able to build a system that’s a lot simpler, a lot easier to prove that it’s safe, and then you pass it off to a human for the last bit of the journey.”

Last Thursday, digital freight broker Loadsmart and autonomous truck startup Starsky Robotics announced that they had collaborated to successfully pass another milestone along the road to mass adoption of self-driving semis.

The two companies were able to automatically dispatch an autonomous truck to haul freight; having successfully priced, tendered and booked via Loadsmart and then picked up and delivered the shipment using Starsky's self-driving technology. The integration of Loadsmart's AI-powered pricing and load matching technology with Starsky's API meant no human intervention was required.

"Today, for the first time ever, the advances that seem obvious for the ride-sharing services are coming to trucking," said Stefan Seltz-Axmacher, CEO and founder of Starsky Robotics. "It's not uncommon for a traditional trucking company to have 5 full-time employees involved in dispatching each truck for each load. By integrating e-brokers like Loadsmart, we are eliminating all back office human intervention and making the shipment process seamless, while focusing on ensuring the safety of driverless trucks. With Starsky's Hutch API, which was also announced today, we will be able to autonomously dispatch autonomous loads on a regular basis."

Ricardo Salgado, CEO, Loadsmart, said, "Autonomous vehicles play an integral role in our vision of delivering end-to-end automated shipping and logistics services. Starsky is one of the leading developers of autonomous trucking technology and given our belief that autonomous trucks will provide great value; the team will help us be at the forefront of providing our clients with access to cutting edge technology so they can advance their supply chain."