UK and US Agree to Strengthen Science and Tech Collaboration 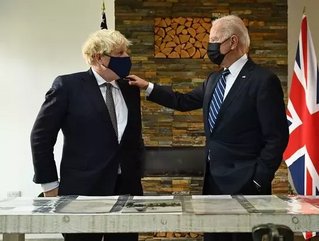 The United Kingdom and the United States yesterday showed that the unity between the English-speaking red, white, and blue nations still stands just as strong as ever. The nations have agreed to deepen ties on science and technology, with the promise that together they will create a new era of strategic cooperation in the field.

The news came as part of President Joe Biden’s first visit to the United Kingdom since his election and ascension into the White House, ahead of the G7 summit. Under the framework of a revitalised Atlantic Charter, this landmark move by the UK and US is guaranteed to strengthen the increasingly valued transatlantic relationship ─ once dubbed “the special relationship” during the 80s ─, create jobs, and protect the security of citizens on both sides of the pond.

Both nations have been leading the world in research and development for several decades, if not centuries, in certain sectors, and this partnership outlines their ambition to maintain that dominance in the face of rising competition to the east. The collaborative effort will see both the UK and US continue to invest heavily in industry-relevant expertise and to develop the capacity to create wealth and tackle inequality while ensuring the values of liberal democracies, open societies, and open markets are embedded in the design and use of technology globally. What will the partnership explore?

The partnership is set to explore a large number of areas for cooperation, including but not limited to research, innovation, and commercialisation; defence, intelligence, law enforcement, and security; and make sure that modern technologies are only used as a force for good around the world ─ which is a wholly subjective factor. “Officials from both countries will work to develop the partnership over the course of the next year,” according to gov.uk.

In terms of current pain-points, the initiative is likely to strengthen cooperation in areas such as the resilience and security of critical supply chains, the development of battery technologies, and emerging technologies, including artificial intelligence, and it should improve the accessibility and flow of data to support economic growth, public safety, as well as scientific and technological progress on both sides of the Atlantic.

“It will see the countries work towards a new statement of intent to help realise the full potential of quantum technologies, which use the properties of quantum physics to dramatically improve the functionality and performance of devices, develop proposals on future technology such as 6G and strengthen collaboration on digital technical standards.

The two nations have also committed to continue to broaden collaboration on science and technology to help facilitate world-class research and influence the rules, norms and standards governing technology and the digital economy.

The countries hope to combine their expertise to tackle global challenges such as cancer, pandemic preparedness, antimicrobial resistance, and climate change, including through closer coordination between the Prime Minister’s Council for Science and Technology and the President’s Council of Advisors on Science and Technology, and through closer collaboration between US and UK senior science and technology advisers.”

“In the 80 years since the Atlantic Charter was signed, technology has changed the world beyond recognition.

But the goals that underpin it still bind the US and UK together today: support for democracy, open societies and free markets.

Today’s announcement marks a new era of cooperation with our closest ally, in which we commit to using technology to create prosperity and guarantee the safety and security of our citizens for years to come.”

“The United States is our closest ally and most important research partner – a partnership which harnesses the power of the free market, science and new technology to address some of humanity’s greatest challenges, from antimicrobial resistance to preparing for future pandemics.

The landmark new partnership announced today will deepen those all-important ties and ensure Anglo-American research can continue to develop new technologies to generate wealth and prosperity for the good of mankind for generations to come.”

Presidential Science Advisor and Director of the Office of Science and Technology Policy, Eric Lander, said:

“There are few relationships as consequential as the transatlantic partnership between the United States and United Kingdom in science and technology.

We share a belief in the power of science and technology to improve health, prosperity and security, and a commitment to the importance of investigator-driven research, freedom of inquiry, and equitable participation in the S&T enterprise.

Together, we will seek to set a positive example of how countries can work together to solve the critical and transnational challenges of the 21st century, including pandemic preparedness, climate change, and cancer.”

“I welcome this closer collaboration which will bring together the best of UK and US scientists and engineers. By combining our expertise to tackle global challenges, such as cancer, climate change, and pandemic preparedness, we can make a real difference and improve people’s lives.”