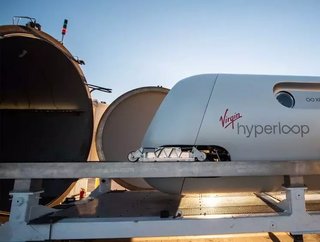 With proponents of the technology heralding it as an entirely new form of transportation, it’s worth narrowing down precisely what hyperloops involve. In essence, hyperloop vehicles are intended to use electric propulsion and electromagnetic levitation, alongside near-vacuum conditions in specially built tubes, to achieve high speeds with lower energy input, for both passengers and freight.

Now, Virgin Hyperloop has used the technology to transport two members of staff along a 500m test track in 15 seconds, reaching speeds of over 100mph - the first time humans have been carried by a hyperloop vehicle.

In a press release, Richard Branson, Founder of the Virgin Group, said: “For the past few years, the Virgin Hyperloop team has been working on turning its ground breaking technology into reality. With today’s successful test, we have shown that this spirit of innovation will in fact change the way people everywhere live, work, and travel in the years to come.”

The concept of hyperloop transportation was first mooted by Elon Musk as a joint effort between Tesla and SpaceX, with other companies invited to create their own solutions. The most prominent of these are Hyperloop Transportation Technologies, TransPod and the aforementioned Virgin Hyperloop One.

Jay Walder, CEO of Virgin Hyperloop, said: “With today’s passenger testing, we have successfully answered this question, demonstrating that not only can Virgin Hyperloop safely put a person in a pod in a vacuum environment, but that the company has a thoughtful approach to safety which has been validated by an independent third party.”

The project is of a kind with Elon Musk’s own tunnel transportation visions, having founded The Boring Company in 2016. A more than mile-long test tunnel built by the company is capable of being driven through, with Musk’s eventual ambition involving a series of drivable tunnels capable of beating Los Angeles traffic.