Lt Col Woody Groton has served in the United States Army for over 20 years. He is an Army Cyber officer currently assigned as the Chief Information Officer for the New Hampshire Army National Guard as well as the commander of the 195th Regiment, Regional Training Institute. He also serves as the Chair of the New Hampshire Information Technology Council.

Lt Col Groton has a Master’s of Science in Information Assurance/Cybersecurity from Regis University, a Master’s in Strategic Studies from the U.S. Army War College, and a Bachelor of Science in Engineering Science from Loyola University Maryland.

As a Certified Information Systems Auditor (CISA) and Certified Information Systems Security Professional (CISSP), Lt Col Groton leads a team of IT professionals responsible for the Guard’s network and ensures its readiness to counter any threat. “Cyber security is integrated into everything we do. With IoT permeating everything, almost any activity you care to name could potentially be disrupted, so network modernisation is one of the top U.S. Army priorities currently.”

LTC Groton is the current exercise director for Cyber Yankee, which in 2020 is part of the FEMA National Exercise Program. He is considered an expert at whole of government response to cyber-attack against critical infrastructure and state/local government.

Lt Col Groton is passionate about his team, and for a career soldier he is refreshingly democratic in his approach. “Rank is not really relevant, because we have extremely capable IT professionals here, whose entire focus is technology. When we have a problem we solicit solutions from the team rather than directing them in any particular way!” You might think the army was not the natural home for a geek, he jokes, but in the best sense of that word the Guard attracts people who relish the most intractable problems, and will work all hours till they are solved.

Lt Col Groton is keen to stress the benefits of deepening relationships between all interested parties at a regional level, something which has been brought into sharp focus by the current COVID-19 crisis. “The relationships we have built here in NH, for example with the State CIO or the Chief Information Security Officer (CISO) are really important. We have mutual trust and real friendship. That applies right across the region. For example, the Massachusetts Water Resource Authority utility has been an important partner over the years, inviting guardsmen in to review their operational technology systems, since a cyber incident at any utility could be crippling for the entire community.”

Read the Army National Guard story in the brochure 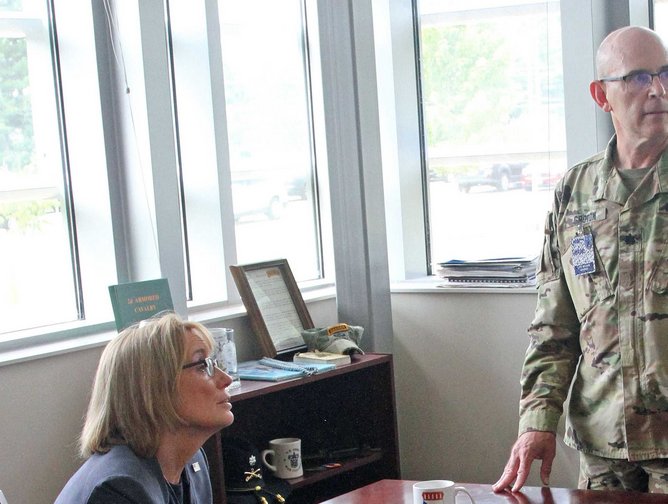