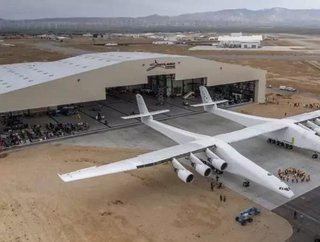 Microsoft co-founder Paul Allen has unveiled the world's biggest plane, which has finally left its hanger in the Mojave desert for the very first time...

Microsoft co-founder Paul Allen has unveiled the world's biggest plane, which has finally left its hanger in the Mojave desert for the very first time.

The Stratolaunch plane boasts a wingspan of 117 metres, which is wider than a football pitch is long, and six engines. It is designed to compete with Elon Musk's Space X in the battle to send satellites into space.

Space X's reusable rockets are currently leading the charge, having successfully tested the Falcon 9 numerous times and re-landed and reused the rocket, in addition to recently successfully reusing the Dragon capsule for the first time. However, the Stratolaunch wants to redefine the industry by conserving fuel and launch the satellites on rockets whilst the plane is in flight, effectively eradicating the fuel cost of launching from a launch pad.

A Satellite Industry Association report found that the satellite industry reported more than $200bn in revenue in 2015 and one of the fastest-growing segments of the industry is the satellite networks - exactly the market that Allen is targeting.

The budget for the space plane was $300m but it has not been revealed if the project met that target. It is, however, on target to have its first launch demonstration in 2019.

Initially, the plane is to carry one rocket into space but hopes remain that the Stratolaunch could eventually carry three satellite rockets in one flight.

Richard Branson is trying to create a business out of sending humans to space for luxury holiday trips and he used one of Allen's first ventures into space flight to design his Virgin Galactic, yet the Stratolaunch is not planning to ever send civilians to the edges of our atmosphere.