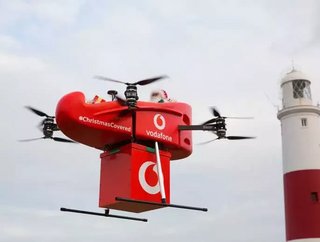 Vodafone has announced that it has completed the first UK drone delivery over a 4G mobile network. Traditionally, drones are flown using a radio link...

Vodafone has announced that it has completed the first UK drone delivery over a 4G mobile network.

Traditionally, drones are flown using a radio link and they have to be in sight of the operator.

In contrast, controlling drones via a 4G network means they can be monitored in real time, reducing the need for them to be flown in line of sight.

“Flying a drone over 4G for the first time gives us a glimpse into the future; 4G or 5G-enabled drones will be used in a range of sectors, from agriculture and retail to construction and energy.

“We are helping businesses get ready for an exciting connected future, supported by our most reliable network ever*.”

Vodafone said that the drone is the “first of its kind” to be built and flown in the UK which harnesses the power of the firm’s network via a portable 4G router.

The British telecommunications firm pointed out how, in the future, drone delivery over mobile work could be used to drop vital supplies into hard to reach places.

5G will also make the drones more responsive which is important in more built-up places.