Al Lindseth is SVP of Technology, Process and Risk Management at Plains All American Pipeline, where he has evolved his hybrid role over 22 years.

Acting as the senior management 'face' of Financial Business Risk Management, Information Technology and Services and Cybersecurity to the board, management and other stakeholders, AI Lindseth received the 2009 5 year MVP Award from Evanta, awarded to one CIO nationally every year.

Evanta described Lindseth as 'the leader that has had the most significant impact on the CIO Executive Summit community.'

After 22 years in a role where tenures are usually a lot shorter, Lindseth jokes that “I've been to a few conferences where they get everybody to stand up and gradually sit down as they count the amount of years in the role, until it's only me and some 70 year old guy still standing,” he said.

“I've always felt in the CIO role that my responsibilities extend beyond the traditional technical responsibilities. You can't just stay focused on the technology. You have to get better at the Change stuff,” said Lindseth.

Still driven after all these years

“I’m really goal-oriented. I walk around making lists all the time: personal goals, career goals, family goals, weekly, monthly and annual goals. Of course, family's number one to me.  I have two boys who play tennis.  I didn’t grow up playing it, and have had a lot of fun learning something new with them. My wife and I decided a number of years ago to give more income to philanthropy, but make it fun. And she's really taken that and run with it, and we attend many events and have discovered great causes in Houston. My motto is that ‘life’s an adventure’. My wife and I like to travel. You have one life to live, so you have got to have fun and be with people that you enjoy.”

In terms of mentors, Lindseth points to his father and those who served with him in Vietnam: “I had the pleasure of taking my son to my dad's 173rd Airborne Brigade reunion right before COVID. There was one gentleman who at the time was 18 years old, just one year older than my son. He had to take point during a rescue mission basically knowing that if he got stuck out there, they weren't going to be able to divert to help his team from the core mission. What people can accomplish really inspires me.” said Lindseth.

Leaving a legacy by planning for succession

“I spend a lot of time mentoring and developing people,” said Lindseth.

By investing in peers and their success, Lindseth is safeguarding the business for when he is gone. Where necessary, he also brings in more senior people at different levels to help with succession planning. By redesigning and tightening up the entire program, the teams are allowed to run more effectively without him and become more self-sufficient.

“This really allows me to take on new roles. There's always more stuff to focus on. I never get threatened by somebody coming in and taking over my position. I'm always trying to move myself out of a role eventually,” he said.

“What I'm most proud of is the job I've done succession planning with Dan Reinbold. Under his leadership and my support, we got the company through the pandemic when everything went remote.”

Lindseth is also proud of the business risk management program he designed, citing the reputation that it has and the results that it's achieved, alongside carrying a cultural identity and language into cyber.

Houston - we have lift off

Lindseth is a community leader and influencer in Houston, saying it is an exciting place to be: “It's very accepting and collaborative. I was involved in 2004 with the Greater Houston Partnership in trying to bring the CIO summit to the city (Lindseth won 'Houston CIO of the Year SuperGlobal Category' in 2019) and make it a better place for startups.  It’s incredible to see what’s developed almost 20 years later here.” 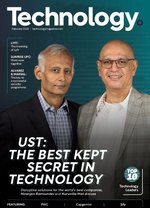