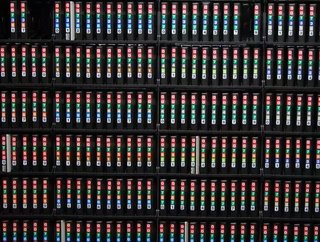 Research scientists at IBM have recorded a new world record in tape storage – their fifth since 2006. The new record of 201 Gb/in2(gigabits per squar...

Research scientists at IBM have recorded a new world record in tape storage – their fifth since 2006.

The new record of 201 Gb/in2 (gigabits per square inch) in areal density was achieved on a prototype sputtered magnetic tape developed by Sony Storage Media Solutions.

This new record areal recording density is more than 20 times the areal density used in current state of the art commercial tape drives, and it enables the potential to record up to about 330TB of uncompressed data on a single tape cartridge that would fit in the palm of your hand.

330TB of data are comparable to the text of 330mn books, which would fill a bookshelf that stretches slightly beyond the northeastern to the southwestern most tips of Japan.

Tape storage is currently the most secure, energy efficient and cost-effective solution for storing enormous amounts of back-up and archival data, as well as for new applications such as big data and cloud computing.

“Tape has traditionally been used for video archives, back-up files, replicas for disaster recovery and retention of information on premise, but the industry is also expanding to off-premise applications in the cloud,” said IBM Fellow Evangelos Eleftheriou.

“While sputtered tape is expected to cost a little more to manufacture than current commercial tape that uses Barium ferrite (BaFe), the potential for very high capacity will make the cost per TB very attractive, making this technology practical for cold storage in the cloud.”

IBM has worked closely with Sony Storage Media Solutions for many years and the results of this collaboration have led to various improvements in the media technology.

Innovations have included advanced roll-to-roll technology for long sputtered tape fabrication and better lubricant technology, which stabilises the functionality of the magnetic tape.

IBM has a long history of innovation in magnetic tape data storage. Its first commercial tape product, the 726 Magnetic Tape Unit, was announced more than 60 years ago. It used reels of half-inch-wide tape that each had a capacity of about 2MB.