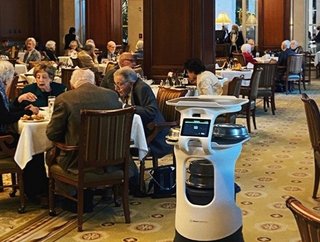 Robot servers in dining rooms may be the answer to staffing shortages in senior-living communities, according to a new white paper.

The report, issued by the Front Porch Center for Innovation and Wellbeing (FPCIW), examines how dining robots enhanced operations and improved the experience for both residents and staff during a 90-day pilot program at two California Front Porch communities.

The Front Porch Center for Innovation and Wellbeing (FPCIW) is part of Front Porch, one of the nation’s largest not-for-profit providers of retirement living, active adult and affordable housing communities.

“One of the more important findings was that using the robots allowed more quality time for residents and staff to connect, thereby boosting overall satisfaction for everyone and achieving one of the major goals of this program,” says Davis Park, Vice President of FPCIW. “Among other benefits noted by pilot participants and detailed in the white paper include faster service; improved employee safety and wellbeing; and enhanced employee recruitment, retention and morale.”

The Servi robots developed by Bear Robotics are equipped with artificial intelligence software that features spatial mapping and self-driving. They can autonomously carry food, drinks and dirty dishes between the kitchen and resident dining areas, automatically adjusting their paths to avoid obstacles.

The robots can perform multiple operations such as food delivery, bussing, hosting, patrol and party modes. Each robot can carry up to seven entrees depending on plate size, and adjustable speeds allow for the robot to be custom fitted for each environment.

The Bear Robotics pilot program builds on an existing portfolio of successful FPCIW projects in artificial intelligence and robotics, including the centre’s work with Voice First solutions and robotic pets. The centre collaborates with older adults and staff to pilot promising ideas, collect research data, evaluate the outcomes, and then share findings within the senior services field to promote innovation and increase the adoption of technologies.

“The robots are intended not to replace but to work alongside humans to help address staffing challenges first experienced during the COVID-19 pandemic and simultaneously to elevate the customer experience,” says Kari Olson, President of FPCIW. “We’re pleased that efforts to continue the use of the dining robots beyond the pilot have been supported by the communities, and we look forward to bringing this technology to other Front Porch communities.”